Sharon Pincott is an Australian with a passion for Africa's wildlife. A gifted writer, photographer and dedicated wildlife conservationist - now an elephant specialist - she abandoned her high-flying life in March 2001 and moved to Zimbabwe, to live and work among the wild clan of elephants known as The Presidential Elephants of Zimbabwe, on land bordering the Main Camp section of Hwange National Park.​ Sharon finally left Zimbabwe and her work with these elephants, after endless battles over 13 years, in October 2014.

PLEASE NOTE:  As at June 2019 Facebook deleted Sharon's popular ElephantDawn facebook page and also her personal page. For now, she has reverted to using her old Zim elephant page http://www.facebook.com/PresidentialElephantsZim. 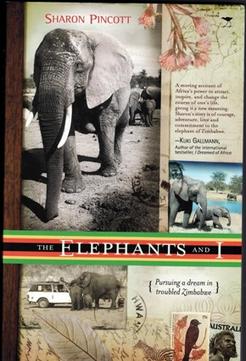 Be inspired by Sharon's stories in Elephant Dawn, The Elephants and I and Battle for the President's Elephants.

p7 ... My friends thought I had it all. Yet a fire burned in my belly for Africa, and no matter how often I visited, I lived with a fierce longing to return. I was always planning my next trip, and living on memories of my last – elephant giants, majestic and free, wandering with great dignity across the open plains, rumbling their contact calls; the exquisite reflections of elegant giraffes enjoying their evening drink; the deep throaty call of a black-maned lion, part of the splendid dusk symphony.

The African bush was where I felt whole.

As Africa beckoned – my enthusiasm for my career already gone – my liking for the lifestyle I still led quickly began to fade too. Frequent shopping sprees provided only fleeting pleasure, temporarily masking the unsettled feeling I had. Too much that cannot be bought was still missing from my life. I began to feel like a stranger in my own home. I heard the call of Africa .... 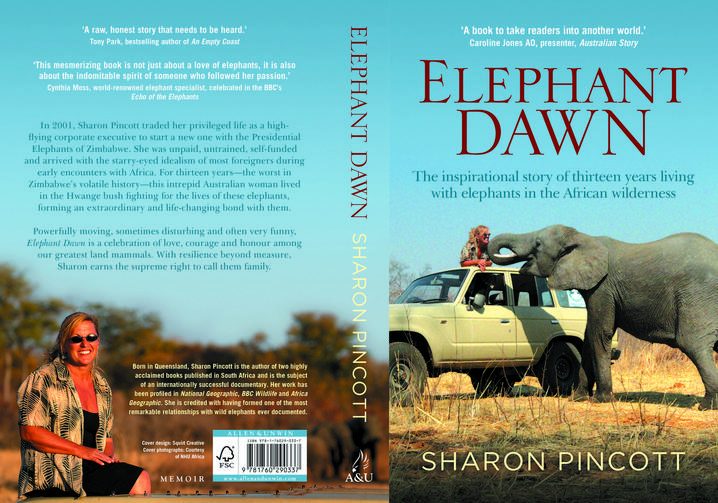 … I knew that something unbelievably preposterous would eventually happen, since the year to date had been relatively uneventful. Despite the beauty and the fun times, absurd events had, in actual fact, been the yearly norm for me since my 2001 arrival in the Hwange bush. This particular incident happened in 2008, and by then I was becoming quite accustomed to the ridiculous.

There’s an expression, from bygone days, that has repeatedly rolled around in my mind since my arrival in Africa: ‘Beyond this place there be dragons’. It’s what the early map-makers declared when they believed that they’d arrived at the edge of the world, and it seems to sum up my life in the Hwange bush where something unsavoury always appears to be lurking just around the corner, ready to pounce.

This particular year spewed forth a grand measure of the outrageous. In April I found myself on the wanted-persons list of the Zimbabwe Republic Police. I remember feeling rather like Ned Kelly. I had visions of my mugshot being hastily printed on a sheet of paper, along with a reward for my capture…

… Everything in Zimbabwe was broken. Nobody even had a tissue to spare.

Shaynie turned to the poetic iSiNdebele language for a name for Misty’s baby, one that had real meaning in the current day. People were sharing the little bit they had. Two teaspoons of sugar in the coffee of a visitor, not knowing when or if it could be replaced, was a sacrifice no one resented. All hope was not gone and people were rebuilding. Many had no choice but to try.

Shaynie chose the name Masakhe, which means ‘to build’ or ‘to rebuild that which has been broken’.She knew that for me, and for the Presidential Elephants, it was also a fitting name. So many things had been broken for us too, and it was time to try to rebuild.

The next time I came across Misty I leaned out of my 4x4 window and, gently placing my hand on the head of her baby, I christened him Masakhe. 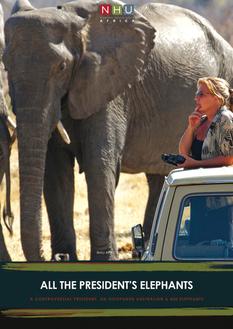 Take this Africa Geographic link to read more about Sharon's past work: http://blog.africageographic.com/africa-geographic-blog/wildlife/more-battles-for-the-presidential-elephants-of-zimbabwe

Extracts from the Highly Acclaimed
​Battle for the President's Elephants

p2 …  Australia, New Zealand and Zimbabwe have all, at different times in my life, been ‘home’ to me. They are so diverse, but all are loved, filled with memories of great joy, sadness, and inspiration too. Australia is where I was born, and where I spent the first 30 years of my life.

I come originally from Grantham, a tiny country town in the Lockyer Valley in sunny south-east Queensland – the largest of Australia’s eastern states. I lived there as a child on my parents’ vegetable farm in a wooden house perched on wooden stilts, prudently designed to catch the breeze. The sprawling fields outside sometimes lay freshly ploughed, although they more frequently boasted a cover of bright green leaves as far as my young eyes could see.

I grew up with three sisters. First-born was Genevieve. Just one year later came Deborah, followed by me and then Catherine. When we were old enough, we woke at dawn and crawled out of bed to earn pocket money washing cucumbers, or rubbing the husks off dried pumpkin seeds. More often though, we crawled out of bed to catch cabbages, which were cut and then thrown to us by our father. These were packed into big square wooden crates and transported to markets in Brisbane, the thriving capital of Queensland.

In November 2009, Sharon was appointed Getaway magazine's 'Elephant Ambassador in Africa'. She wrote for Getaway about these elephants, the environment and the surrounds every month.

Sharon then blogged for Getaway magazine:
Visit http://blog.getaway.co.za/author/sharon-pincott/to read news about her elephant friends and adventures. Go ahead ... live vicariously through her accounts!

Sharon Pincott's new book - covering all of her 13 years with the elephants in Hwange, titled ELEPHANT DAWN - was released in Australia and New Zealand on 25 May 2016.  A South African edition is also available.

Sharon's latest book, covering all of her 13 years with the Presidential Elephants in Hwange, was released in Australia and New Zealand on 25 May 2016, in South Africa on 25 July, and in the USA on 1 November.  You can also order from Bookdepository.com with free world-wide delivery.

Now remote from Robert Mugabe’s rule, Sharon writes without restraint sequentially through the years, taking us on a truly unforgettable ride of hope and heartbreak, profound love and loss, adversity and new beginnings. This is the haunting, all-encompassing story we’ve been waiting for.   Select the 'Books by Sharon' tab at the top of this page to read more.

DISTURBING EVENTS MAKE IT IMPORTANT FOR YOU TO READ THE 2014 POSTS ON THE PRESIDENTIAL ELEPHANTS FACEBOOK PAGE.   PLEASE CLICK THE LINK
​ABOVE TO DO SO. 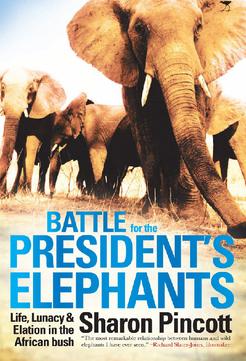 … ‘Lady!’ I squeal. ‘You crazy monster! Do you actually want to drive my vehicle today?’ Her dexterous trunk slithers inside the window of my 4x4 and grabs a hold of the steering wheel. The gaping tip of her trunk worms towards my mouth, exposing two enormous moist nostrils. I’m reminded of a big spongy sea urchin as she exhales a stream of warm air, usually flecked with mud particles, onto my face. She takes my own fingers in the fingers of her trunk and gives me an elephant handshake. Her pull is powerful and I struggle for a moment to release her grip. She concertinas her trunk, like an accordion being played vertically, so that when I rub it, it feels rough and deeply grooved. The flapping of her huge ears is so near that I’m fanned by a cool breeze.

It’s mind-boggling that this is a wild, free-roaming elephant. When I arrived on the Hwange Estate in 2001 she was just another elephant. Once she’d revealed her true self to me, she deserved to be more than this. She deserved to be known…

Select the  Books by Sharon  tab at the top of this page to read more, and find out how to purchase a copy of her books.
​(Sharon's royalties from the sale of these books help to fund her ongoing voluntary work with elephants in Africa)

An Extract from the Highly Acclaimed
The Elephants and I​
​

'The Presidential Elephant Conservation Project' page on Facebook is still accessible.
Click on this link - www.facebook.com/PresidentialElephantsZim -  to read about Sharon's past work.

All The President's Elephants

​​From a tender age I was at ease with the outdoors and with animals, finding even the most peculiar creatures endearing ...

You can now view ALL THE PRESIDENT'S ELEPHANTS freely online at this address: https://vimeo.com/231846100

In February 2016 it became a finalist in the International Elephant Film Festival – ‘the best of the best’ elephant films in the world from the past nine years; an event that involved both the United Nations and the Convention on International Trade in Endangered Species. As a finalist, it will now be showcased extensively throughout the world, with specifically targeted areas to include those where ivory trade is high. It’s also hoped that screenings to school children in African nations where poaching is high, will help them to fall in love with elephants.

-  A few minutes of actual footage from the documentary

​
Select the 'Videos and Photos' tab at the top of this page to view more documentary footage - including how Sharon's kiss with a wild, free-roaming elephant came about.

Sharon's relationship with these elephants is said to be one of the most remarkable relationships between humans and wild elephants ever documented anywhere in the world.  Screen Africa describes the documentary as "unforgettable" and "touching and profound". Intrepid Explorer magazine calls it 'riveting' and 'graphic and powerful'. When it screened on French television its title was change to 'The Elephant Guardian' (La Gardienne Des Elephants). Television rights are being sold by its owner, Natural History Unit Africa (based in Cape Town), and their world-wide distributor, Powercorp International Ltd (based in the UK).