Past Elephant Conservation on the Hwange Estate, Zimbabwe​ 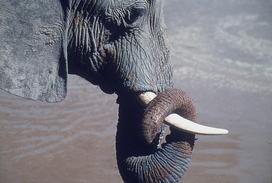 (Please note that circumstances change regularly in Zimbabwe. Be sure to double-check that the lodge you book with is still doing game-drives in areas where the Presidential Elephants are regularly encountered.)

In March 2001 Sharon Pincott left her home in Australia, and began working with ‘The Presidential Elephants of Zimbabwe’ on a full-time voluntary basis, on land bordering the Main Camp section of Hwange National Park in the west of the country. President Robert Mugabe decreed, in 1990, that the 400+ elephants which roam this unfenced land – known locally as the Hwange Estate – should never be hunted or culled, and that they should symbolize Zimbabwe’s commitment to responsible wildlife management.

Sharon instigated a formal naming process, for ease of identification, and learnt to know hundreds of wild, free-roaming elephants as individuals, and members of close-knit families - while closely monitoring their lives (their ‘social structure’ and ‘population dynamics’) on a daily basis.​

It was an idyllic time.

The Presidential Elephants of Zimbabwe 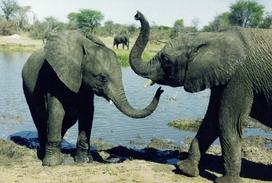 But it soon became apparent that snaring was rife – Sharon’s elephant friends succumbing to terrible injuries - and snare-destruction teams were established to help combat the poaching problem. No sooner was the snaring situation under better control, a government official claimed this tourism land as his own (as part of Zimbabwe’s ‘land reform’ program), and managed to secure quotas to sport-hunt. What followed was 16 months of heartache and endurance, before this situation was eventually righted. But still, the degradation – and the threats and intimidation - continued. Every year from that point on, pans were left to dry up; the elephants forced to move elsewhere to find adequate water. Snaring was once again rife, while continual efforts were made to save the lives of maimed animals.

What kept Sharon in Zimbabwe was the beauty and wonder of the Hwange veld – which still remained, despite everything – and the extraordinary relationship that she formed with these free-roaming Presidential giants over many years. Wild, adult female elephants came to Sharon when they were called by name – and even more remarkably, allowed her to rub their trunks.  Sharon trained some safari guides from surrounding lodges to be able to identify key individuals, so that they could better share their splendour with tourists.

Her book titled The Elephants and I tells the 2001-2008 story of her life with these elephants.

In late-September 2009 – before the rainy season began – Sharon proactively sought kind donor assistance, and personally arranged and oversaw the scooping of six pans on the Hwange Estate (including its three major pans Kanondo, Mpofu and Mtaka). As a result, in 2010 - for the first time in five years - the Hwange Estate finally had adequate dry-season water for its wildlife, including its elephants.

Sharon considered ‘The Presidential Elephants of Zimbabwe’ to be a truly unique tourist attraction, which could potentially attract a myriad of people from all around the world to Zimbabwe (bringing much-needed foreign currency into the country) - yet the indifference amongst others in Zim continued, adding to the frustrations of her ongoing voluntary work. Nevertheless, she continued to strive to protect and promote these extraordinary elephants over 13 years, until she finally left Zimbabwe, after endless battles and more land claims in October 2014.

Interview with The Intrepid Explorer